More bang for your buck

You are here:
Insights 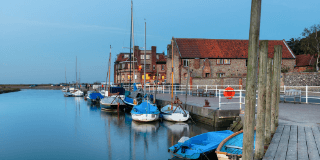 What does £1 million buy you in London or Norfolk?

The London housing market has undoubtedly found it difficult to navigate its course over the past year, with sales volumes at their lowest level since the global financial crisis.

In the regional markets however, the impact of Brexit uncertainty has been less severe. The average price of a prime property¹ across the East of England rose by 2% over the past year. This compared to London where the price threshold has fallen. At £680,000, the threshold for prime property is less than half that of the capital (£1.45 million). When considering the £1 million + market there is far more property for your buck than can be achieved outside of the capital.

Across Norfolk, properties that have sold for over £1 million over the past two years have achieved an average £psf of £597, for equivalent properties in London the average was £1,248 psf. So, what does a £1 million budget in each location buy? In Norfolk, you’ll be looking at an individually-named substantial period detached property or a stunning barn conversion. Often with a sizeable amount of land, additional outbuildings and views of the beautiful coast and countryside. Blakeney, Burnham and the golden triangle to the south west of Norwich are popular £1 million + destinations. In contrast, a property in the capital is liable to be around half the size and most likely an apartment or terrace. One in five properties is a new build, rising to nearly half for £1 million+ apartment sales. Inner London accounts for two-thirds of all seven figure plus sales, prime London boroughs² accounting for over one fifth of all sales.